This week has been an exciting week. The needle felted pipistrelle bat I created was mounted and given as an award at the Palace of Westminster to MP Helen Hayes as she is the species champion for the common pipistrelle and won best parliamentary species champion at the Species Champions Annual awards ceremony. Well done to Helen for all her hard work!! It was presented by BBC Journalist Frank Gardner.

The little bat took many hours of sculpting through the art of needle felting. His body is made of core corriedale wool. His wings, legs and tail are wool wrapped over wire.  His beautiful brown coat is made of a blend of corriedale and merino wool. His eyes, nose, ears and tiny feet are made of wool too.

The common pipistrelle as its name suggests is the most common bat that you might see flying in your garden on a summer night! Yet like all our bats in the UK they need our help and protection to ensure their numbers don’t decline again. They are so important to our environment! I love bats but some people don’t and this is usually as they don’t know much about them and bats are so misunderstood.

When you look at a bat close up they are actually very tiny and many times smaller than the size of my needle felted one. In fact a real pipistrelle bat weighs about 5g and their forearm length is less than 35mm in length. One of these tiny creatures can eat around 3 thousand insects in one night – how amazing is that!? Due to destruction of their natural habitat many bats now need to roost in houses and churches and rely on people to preserve these roosts.

Each bat usually has only one pup each year and too often that little pup will become lost or get caught by a local cat and so many each year don’t survive. The Bat Conservation Trust has a fantastic helpline if you find a bat in need of help. You can also find out how to support their work 🙂

Having worked for 12 years at the Bat Conservation Trust I have quite a good knowledge of bats but it was still a challenge to get the anatomy right. Bats are so fascinating and detailed with their tail membranes and wing membranes! I wanted to give the illusion of fully formed wings that could spread out but tucked in as if it has landed. I hope I did it justice.

As with all my needle felted animals I used lots of photos of the real animal at every angle for reference. Thankfully no needles were broken but I did remake his face at one point and a good deal of patience and chocolate rewards were needed along the way!! This aside I really did enjoy making him and I was so overjoyed to see the smile on Helen Hayes’ face too when she received him as her award !

Seeing as I manage the National bat helpline (UK) as my day job it was about time I made a bat! Thankfully I was asked to make this little brown long eared bat (BLE) (Plecotus auritus) – although when I say little she is very big compared to real BLEs which have a body length of around 5cm.

She was a challenge as not only did I have to work out how to make folded wings and a tail membrane but BLEs have such massive ears as you can see. She is made of corriedale and merino wool and has wire inside her forearms, legs and ears.

BLEs can live up to 30 years, eat thousands of insects each night, have only one baby a year and these fantastic huge ears help them to listen for prey as they glean them from leaves.

This one is definitely alert and looking for a cuddle but usually at rest their ears curl back a bit like ram’s horns to show only the tragus (the pointy inner ear lobe). Hope you like her and agree that bats are amazing! 🙂 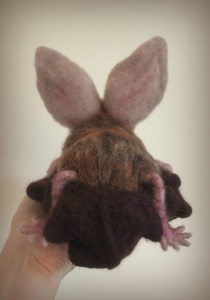 Finally this weekend I finished needle felting my little badger!

Thank you to those of you who voted on facebook or twitter for the next felted British animal of your choice! there were some great suggestions! The badger however was the obvious favourite and it is understandable why!

Badgers are just so adorable and at the moment they need all the help they can get….so here he is !!! he is a very happy and playful young badger and ‘fit to be loved!’ 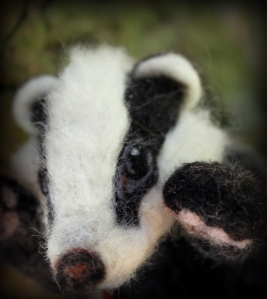 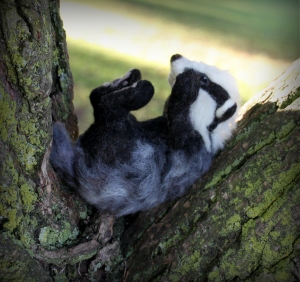 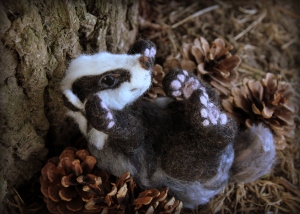 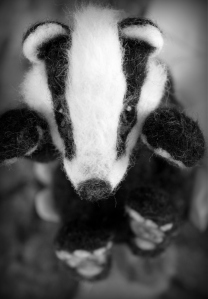 This little needle felted badger, just like all my other pieces is made of 100 % wool (a mix of merino and corriedale) and took many hours of labour but tonnes of love to give him his cute playful character.

He will soon be for sale in my Etsy shop and 20% of his sale price will be donated to the Badger Trust who are ‘working hard to help badgers, by tackling the threats they  face, promoting their interests, and by providing vital help for around 60 local badger protection groups across England and Wales’.

For those who would like have a go at making your own needle felted badger -see my previous post which shows you step by step how to start off with a badger head.

Never miss out on a blog update! – add your email address here!